During the frightening three-hour flight, Gene was mostly conscious and, at times, he said later, he thought he wasn't going to make it.

“I felt unwell in the morning but went to work. I ended up being rushed to Alice Springs Hospital” Gene remembers.

Hospital staff quickly determined that Gene was having a major heart attack and, while they could treat him with clot-busting drugs to ease the blood flow to his heart, he urgently needed life-saving heart surgery interstate at the Royal Adelaide Hospital.

The only way to get Gene to Adelaide quickly – and safely – was under specialist medical care in a RFDS 'flying intensive care unit'.

RFDS Flight Nurse Carol Illmayer recalls Gene looking "terrible and grey" as he arrived on a stretcher at RFDS Alice Springs Base.

As the RFDS crew prepared to load the aircraft, Gene experienced cardiac arrest. 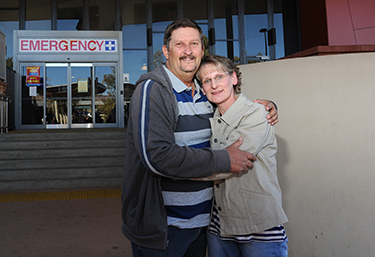 "The moment we secured him inside the aircraft Gene arrested again; he arrested another six times before we’d even closed the plane doors," Carol remembers.

Faced with the decision to return Gene to hospital where he most certainly would have died without surgery, the crew decided to press on to Adelaide in the hope that they could keep him alive long enough to get the heart surgery he desperately needed.

"It was very, very busy; it challenged both the doctor and myself in our skills.

“It tested all of our ECG knowledge; we had to draw up multiple drugs to get him through and his blood pressure was dropping," Carol says.

But 50 minutes from landing in Adelaide the drama intensified when Gene went into cardiac arrest again.

They lost count of the number of defibrillator shocks they had to administer to Gene.

It wasn't until they landed that they could check the equipment and discovered Gene had been shocked 54 times.

Gene recalls that during the flight he experienced an intense feeling of tiredness, "as if the life had been sucked out of me".

"There were times there when I thought, 'this is the end, I'm not going to make it'," Gene says.

Happily, Gene had surgery to insert a stent to keep his artery open.

“I'd have to be the luckiest person in Australia." 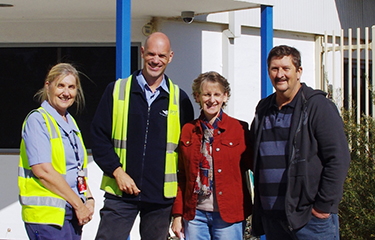 The RFDS performs 100 aeromedical missions across Australia every day – eight flights in the Northern Territory – to airlift evacuate a critically-ill patient like Gene from an outback location or country hospital to a major hospital for life-saving surgery or specialist care.