Stephen and his partner Rebecca camped overnight at Cadney Park Homestead, 150 kilometres north of Coober Pedy in South Australia’s outback when he was woken by intense pain.

“I waited until morning, thinking the pain would go away,” Stephen says. “But it didn’t, so we talked to the park manager who told us about the nearest clinic, 70 kilometres to the north – the RFDS Marla Health Service.”

During the drive to Marla, Stephen was increasingly uncomfortable and the pain soon became excruciating. What he didn’t know was that his diaphragm had herniated – a fist sized hole had developed at the top of his diaphragm, which separates the lungs and heart from the stomach and bowel.

As a result, his small and large intestines were pushing through the hole causing immense pain and a dangerous threat to his life. 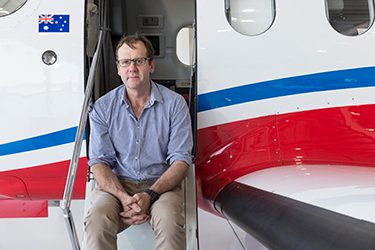 As soon as they arrived in Marla they were met by two Remote Area Nurses who provided pain relief and, concerned at his worsening condition, quickly contacted the on-call RFDS Doctor in Port Augusta.

“The Doctor confirmed the nurses’ concerns and decided I should be evacuated to hospital in Adelaide as soon as possible,” Stephen says.

Just south of the Northern Territory border, Marla is over 1000km from Adelaide – a trip that would normally take about 11 hours by road but just over two hours in an aeromedically-equipped RFDS Pilatus PC-12 aircraft.

On arrival in Adelaide, Stephen was taken to hospital where he had scans and then underwent emergency surgery. Within a week, Stephen was back home on the Yorke Peninsula recuperating.

“I didn’t know it then, but I now know that this type of hernia is a rare and life-threatening condition...Your chances of survival worsen considerably if it’s not diagnosed quickly and corrected by emergency surgery” 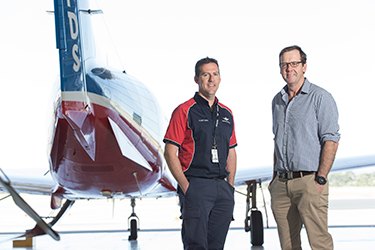 The RFDS performs 100 aeromedical missions across Australia every day – over 15 flights in South Australia– to airlift a critically-injured patient like Stephen from an outback location or a country hospital to a major hospital for life-saving surgery or specialist care.

The RFDS also delivers critical support to those who live in urban centres. This includes the regular transfer of patients to interstate hospitals for life-saving surgery such as organ transplant and heart surgery on newborn babies.

Can you help us save lives?
DONATE
Darryl
Aged 51
Yunta
Next Story Teamwork in a heartbeat saves Darryl.
READ DARRYL's STORY